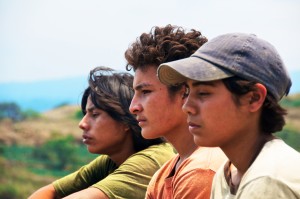 The talented young cast from The Golden Dream

A note from Saffron Hill Films Chairman, Tom Abell, on The Golden Dream.

“Every so often a film comes along that we know we just have to bring it to your attention.

We saw THE GOLDEN DREAM by first time director Diego Quemada-Díez during the Cannes film festival last year and were profoundly moved by this exquisite, masterful piece of filmmaking. It immediately became a “must have” and securing it for UK and Irish distribution was one of our highlights of the festival.

The film follows four Guatemalan teenagers as they attempt to escape from the slums of Guatemala City to the bright lights of Los Angeles, a dangerous journey undertaken by thousands every year. Six hundred of these actual migrants became extras in THE GOLDEN DREAM as they undertook this almost impossible journey and each of them receive a named credit in the closing titles of the film. No one knows how many of them managed to cross that final border into California.

Many of the non-LGBT films that Peccadillo distributes deal with basic human rights, very often championing those who are normally classified as “outsiders”. Each year the desire to find a “better life” drives hundreds of thousands of would be immigrants across the world to leave their homes and take perilous journeys to find their own golden dream, but more often than not the “dream” bears no resemblance to the brutal truth. Immigration is a subject so often abused by politicians as they use it for political points scoring where “being tough” is incorrectly seen as a solution to a problem that no one really wants to address.

THE GOLDEN DREAM tackles this in a non-sensational, compassionate way that never once becomes sentimental, yet never flinches from honestly showing the plight of those who strive to achieve more than they have. The film challenges the world to face up to that terrible reality and that is why we have to bring you the film” 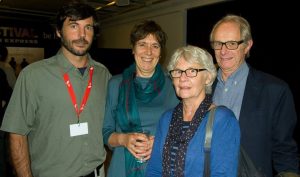 Diego with Ken Loach at the London Film Festival 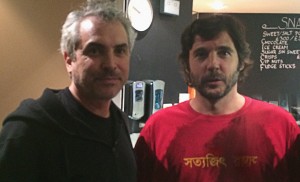