Pio Amato is a fourteen-year-old kid, like all boys of his age he want's to be a "man". A wannabe Mafioso, in reality Pio is more of an Artful Dodger.

Pio Amato is a fourteen-year-old kid, like all boys of his age he want’s to be a “man”. A wannabe Mafioso, in reality Pio is more of an Artful Dodger, picking pockets and stealing luggage to help boost the finances of his extended family, all attempting to live outside the law in The Ciambra, a crumbling apartment block in Calabria, Southwest Italy.

Pio’s boyish charm makes him unique in his ability to slide between the regions different factions – the Mafia, the African migrants, the Romani and the Italians – and thereby manage an almost frictionless trade in stolen goods. He idolises his older brother Cosimo and follows him everywhere, learning the necessary skills for life on the rough streets around the Ciambra. When Cosimo and his father are arrested Pio is determined to fill their shoes, but is he willing, or even able, to make the sacrifices necessary to become a man?

We interviewed writer/director Jonas Carpignano for the Peccadillo Blog about the making of the film, in the first part he talks about meeting the Amato family. Here’s a taster:

How did you first encounter the Amato family?

The first time I met the Amato family was in 2011 after the Fiat Panda filled with my crew’s film equipment was stolen. We were in Gioia Tauro (Calabria) shooting A Chjana (the short film which would later become Mediterranea). In Gioia Tauro, when a car disappears, the first thing you do is “go to the gypsies.”

That’s when I saw the Ciambra for the first time. I immediately fell in love with the energy of the place. Whenever I tell this story, Pio says that he remembers seeing me, but at the time I didn’t notice him – there was too much to take in. We had to wait three days to get the car back because Pio’s grandfather (the Nonno Emilian character is based on him) had just died and they wouldn’t negotiate the ransom for the car until after the funeral. Clearly that funeral procession made a big impression on me because five years later I wrote it into the film. Needless to say the entire situation had an enormous impact on me and soon after I wrote the first draft of the short version of A Ciambra.

More on the Peccadillo Blog

In the second part of the interview Jonas tells us about working with Scorsese, his young lead Pio and the perils of shooting around The Ciambra. Here’s an excerpt:

What were some of the challenges in filming where you did?
Shooting in the Ciambra was the challenge. It’s impossible to fully articulate what the Ciambra is like, but from the film I think you get an idea. It is a wild and unruly place where anything that can happen will happen, often ten or fifteen times over.  Luckily we knew this before going in, so we gave ourself time. We ended up shooting for 91 days.

I think if I had to boil it down, the hardest parts of making the film were waking Pio up in the morning, and directing the scenes that have tons of kids. I know they look all cute on screen, but when they don’t feel like working, man… I’ve got some outtakes and behind the scenes stuff that wouldn’t be out of place in Burden of Dreams.

More on the Peccadillo Blog 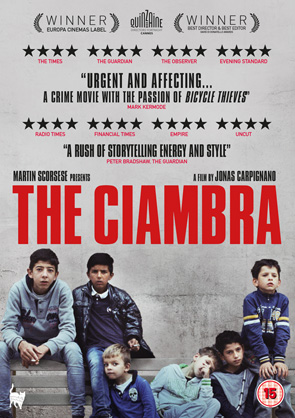