From writer/director/actress Desiree Akhavan (The Miseducation of Cameron Post) comes an ironic, Iranian, hipster date movie; APPROPRIATE BEHAVIOUR is an achingly cool, post-feminist comedy about what happens when a girl comes out and discovers that extraordinary is the new ordinary.

For Shirin (Desiree Akhavan), being part of a perfect family isn’t easy. Acceptance eludes her from all sides: her family doesn’t know she’s bisexual, and her ex-girlfriend, Maxine (Rebecca Henderson), can’t understand why she doesn’t tell them. Even the six-year-old boys in her moviemaking class are too ADD to focus on her for more than a second. Following a family announcement of her brother’s betrothal to a parentally approved Iranian prize catch, Shirin embarks on a private rebellion involving a series of escapades, while trying to decipher what went wrong with Maxine.

From writer/director/actress Desiree Akhavan (the unfathomable love-child of Woody Allen, Lena Dunham and Tina Fey) comes an ironic, Iranian, hipster date movie; APPROPRIATE BEHAVIOUR is an achingly cool, post-feminist comedy about what happens when a girl comes out and discovers that extraordinary is the new ordinary.

An interview with Desiree Akhavan

FROM THE SLOPE TO APPROPRIATE BEHAVIOR

THE SLOPE was about a pair of superficial, homophobic lesbians living in Park Slope, Brooklyn. Making the series transformed the way I approached making films. Up until then I think I had a very rigid idea of what constitutes “cinema”. I’d stand frozen in front of the monitor for minutes that felt like hours, unable to approve the frame- haunted by the question, “would Catherine Breillat approve that frame?” THE SLOPE started off as a homework assignment- I hadn’t started making it with an audience in mind, I just wanted to have fun. We shot cheap and worked fast, creating one 5-minute episode per week and eventually the show started getting critical acclaim and we were invited to screen the series at Rotterdam and selected for Filmmaker Magazine’s 25 New Faces of Film.

With the web series we wrote fast and improvised a lot of the dialogue on set, but with the feature I worked quite differently. I wrote the first draft in a month and then worked with my producer, Cecilia Frugiuele, for a year to get transform it into something completely different. When I first conceived of the project, the main goal was to make something within my means as I had nobody else attached at that point. The original script loosely resembled the structure of SCENES FROM A MARRIAGE; made up of 12 scenes, one scene from each month of a couple’s year- long relationship, tracking the rise and fall of their romance. Once Cecilia and Parkville Pictures got involved, we reimagined what was achievable.

I chose to star in the film because it would have been disingenuous to have hired a better looking version of myself to do an impression. While the film isn’t autobiographical and the events are made up for the convenience of a 90 min narrative, it’s all extremely personal and Shirin (the protagonist) is a heightened/absurd version of my best and worst qualities. With acting and directing at the same time, I found that one job enabled the other. As an actor, I had the luxury of taking chances and becoming incredibly vulnerable, all the while taking comfort in the fact that I was in a position of power and would have the ability shape the performance as I saw fit in post. As a director, I could communicate with my actors on a much deeper level than I had before because I was knee deep in the scene with them. On the flip side, I was working two very contradictory roles, and giving notes to fellow actors is incredibly taboo, so sometimes balancing the bedside manner of both scene-partner and director was a challenge and I had to constantly be checking in with people and making sure everyone felt heard.

WHAT WAS THE MOST CHALLENGING STAGE IN MAKING THE FILM?

I found editing to be the most challenging stage of making the film. I had a really difficult time seeing potential in the rough cut. This is where my lack of experience hurt me- not in the execution of the final product, but with my expectations for it in the early stages of post. It took a lot of work to massage the right pace and tone. A huge transformation took place in the three month I was sitting in the editing room, but I couldn’t see the difference until the last weeks.

WHAT ARE YOU WORKING ON NEXT?

I’m currently developing a half-hour television series that was selected for the inaugural Sundance Episodic Lab. The show is a comedy about a lesbian who comes out as bisexual at 30 and starts dating men for the first time in her adult life. For my next feature, I’ll be teaming up with APPROPRIATE BEHAVIOR producer Cecilia Frugiuele for the film adaptation of a brilliant YA novel we’re not quite ready to reveal. I’m also working on an animated web series with OBVIOUS CHILD producer Liz Holm called THE ORIGIN OF SHAME. 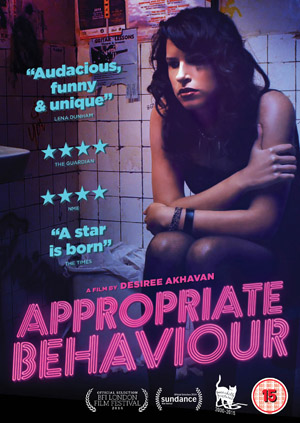